Oktoberfest; the world’s largest beer festival began last weekend. I know it’s the 3rd week of September, but most of the festival actually takes place this month. The festival has become popular and is celebrated all around the world, but if you get a chance to head to the birth place of it all you won’t be disappointed. Oktoberfest comes but once a year in Munich, Germany – it is in fact one of the cities largest and most profitable tourist attractions. The 16 day party attracts over 6 million people every year who consume around 1.5 million gallons of beer. Sound like a good time? Trust me, it is.
Before I get into some tips for surviving Oktoberfest, here is a quick history of the festival. The traditions started back in 1810 to celebrate the October 12th marriage of Bavarian Crown Prince Ludwig to the Saxon-Hildburghausen Princess Therese. Anniversary celebrations were held annually and eventually became larger and more elaborate. By the 1870’s mechanical rides were an expanding feature, and in 1908 brought the first roller coaster to Germany. When the city allowed beer on fairgrounds, makeshift beer tents started popping up, and their number increased until they were eventually replaced with beer halls in 1896. The beer halls, just like the beer tents of today were sponsored by the local breweries. The festival was eventually moved ahead to September for better weather conditions. Today the last day of the festival is the first Sunday in October.
Between the events and beer tents, guests can walk around the 103 acre Oktoberfest grounds to ride the ferris wheel, roller coasters, or one of the many other rides at the festival, stop off at one of the game booths, or simply take a festival tour. Whatever you do, just know you will never be bored.
Getting There
The Theresienwiese grounds are fairly easy to get to, because it is located near the city centre. From the main train station, hauptbahnhof, take the u-bahn metro one stop. The grounds are also accessible by foot from the station and many hotels in the city – if you get lost just follow the guys in lederhosen.
Meeting Point
The Oktoberfest grounds are huge and feels even larger when it’s packed full of similarly dressed drunk people. I know this might sound a little too responsible given the occasion, but setting up a designated meeting point for your group will save some panic later if a member goes missing.
The tents
The beer tents are where you want to be during the festival. There are 14 main tents each with 1,500 – 8,500 seats, there are several smaller tents as well. All the tents are unique, but provide overall the same experience. The main tents are huge – make sure to get your bearings before venturing off, guys follow the girls tradition of going to the bathroom in groups – the buddy system really comes in handy here. You don’t need reservations for the tents, however If you want to make one, you need to do so months in advance.

Find a seat
Keep in mind that you won’t be served unless you are sitting down. So find a space and squeeze in, once you order a beer you are free to get up and roam around as you wish.
Bring lots of cash
There are very few tents that will accept credit cards, but I don’t recommend even trying it. The tents are so crowded and your server does not have time to be swiping your card for each drink you order – there are no such thing as tabs at Oktoberfest. Also make sure to grab cash before actually entering the festival, or you will find yourself waiting in line praying the ATM doesn’t run out of cash before you reach the front.
Tip your server
The beer prices have gone up over the last few years, but the good news is they haven’t passed the 11 euro mark. This year a litre of beer will cost between €10,60 – 10,95  Oktoberfest servers cover very large areas, when it’s time to pay, pass them a little extra to stay on their good side.
Pace yourself
You don’t want to be that person tapping out at noon. It’s easy to get carried away, but just remember it’s a marathon not a sprint.
Strap on your Lederhosen or Dirndl
These traditional outfits are sold all over Munich, but can be a little pricey. I recommend purchasing it ahead of time. For the girls how you wear your Dirndl says a lot about you – a dirndl tied to the right = taken, left = available, center = chastity belt. If you decide to wear regular clothes wear something you don’t mind getting a beer shower in.
Learn the language
German is not one of those languages you can easily pick up over night, but taking the time to learn a few common phrases can help with the locals, and getting on your servers good side. Duolingo is an awesome app for learning some words and phrases in another language.

Put your foot on the table
Putting your foot on the table means that you are prepared to chug your entire beer in front of thousands of people. Now if you are up for the challenge there is no better feeling than having the entire tent cheer for you, but if you fail be prepared for major embarrassment.
Don’t tent hop
This is especially true on busy days. If you secure a seat at a popular tent stay put!! It may seem like a good idea to tent hop, but if you get up from your seat you might be disappointed when you don’t have the same luck with seating somewhere else. All tents are generally the same, so just stay and enjoy your time.
No sandals or open toed shoes
People tend to get pretty intoxicated, at a beer festival… shocking I know… it won’t be too pleasant when a drunk person stomps on your bare toes, or even worse – drops a beer stein on them. Also the floors get extremely nasty, definitely not a place you want to be walking around in sandals.
Ladies – don’t bring a purse
It’ll either be soaked in beer or end up on the grimy floor. A small cross body bag is ok, but definitely avoid anything bigger.
Don’t try and steal a stein as souvenir
There are security guards just waiting for people to try this, and if you are caught the hefty fine will definitely ruin your good time. Just purchase one (a clean one) as you would a regular souvenir.
Don’t save seats
Oktoberfest is a time to bond with beer enthusiasts from all around the world. As mentioned above you cannot order unless you are seated, so if your friends are running late do yourself a favor and don’t try and save them seats. Trust me you’ll avoid some nasty looks from people just trying to enjoy a beer.
The festival tends to be more local during the week and more international on the weekends, so plan your trip accordingly if you want to experience both. 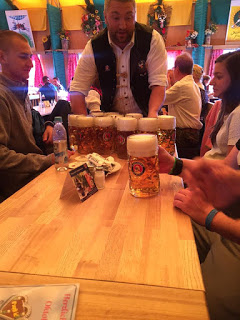 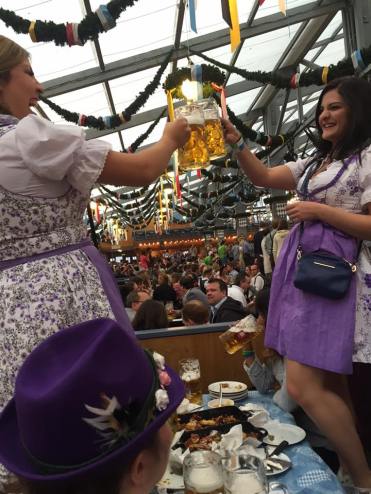 For everything you need to know about Oktoberfest 2017 click here

I’ll be heading back to Oktoberfest for the second time this year!! Follow along on Instagram @awanderlustlifee 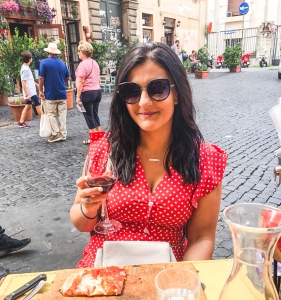 Hi everyone I’m Lauren and I’m addicted to travel (and wine). I love exploring new places and experiencing new cultures. I find myself constantly thinking, where to next?! My addiction started at the ripe old age of 10 when my parents agreed to send me on a student ambassador trip to England and France… the rest is history. I’ve now traveled to over 30 countries and 27 states and I don’t plan on stopping anytime soon. Here you’ll find some inspiration needed to plan your own adventures around the world. Thanks for stopping by!